After her show, Julia Sweeney received an award. 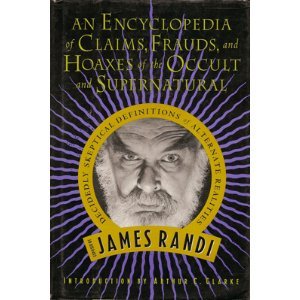 An Encyclopedia of Claims, Frauds,
and Hoaxes of the Occult
and Supernatural
by James Randi and Arthur C. Clarke

Day 1 of the The Amaz!ng Meeting 3

Randi graciously consented to this picture...
A link to one of Randi's DEBUNKMENTS